Lobuche Peak with Acclimatize Trip to Everest Base Camp

A.T. Adventures International offers Lobuche Peak with acclimatizing trip to Everest Base Camp. If you are looking to climb a less crowded Peak than Island Peak, Then the best option would be Lobuche Peak. Lobuche Peak offers ice climbing for the experienced Ice Climber. Lobuche Peak also offers a spectacular view of the High Himalaya ranges of the Khumbu Valley including Everest, Lhotse, Amadablam, Makalu etc.

Lobuche Peak is situated close to the Khumbu Glacier in the Everest Region and offers an attractive summit climb experience. There are two distinct peaks, Lobuche East and Lobuche West.

Although they are associated by a continuous ridge, there is a sharp gap and a much distance between two peaks. The true Lobuche Peak East is quite prominent and is reached by downward into a marked cut off and climbing steep snow/ice slopes to the top.

The Lobuche peaks have been climbed by several climbers. Lobuche East and Lobuche West were first climbed by Laurence Nielson and Ang Gyalzen Sherpa on April 25, 1984. Now Lobuche Peak is used to acclimate and prepare for a Mt. Everest Expedition.

Fly to Lukla trek to Phakding – 30 minutes flight and2 Hours to 2:30 Hours walk

We are trying to make the Lobuche Peak Climb more comfortable by adding an acclimatize trip to Everest Base Camp (5160m) and Kalapatthar (5545m) before attempting Lobuche Peak. Everyone may attempt to climb Lobuche Peak without bottled oxygen.

We will provide training at Lobuche Peak high camp for those who have not climbed or had prior training. They will be training to use ice axes, jumars, ascenders, descenders, crampons, rope fixing, climbing vertically on the ice, belaying and all the techniques of basic ice climbing. The approach to climb Lobuche Peak is an alpine of simple to moderate difficulty, where one will have the opportunity to be trained on proper technique for using climbing mechanisms on high mountains.

Lobuche Peak is often taken as preparation for Mt. Everest. These guidelines will help you to be more comfortable while ascending to the peak. 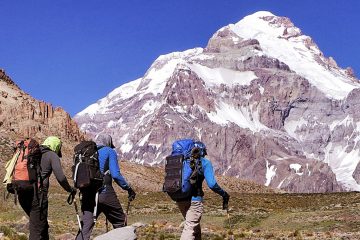 INTRODUCTION At 6,960 meters, Aconcagua is the 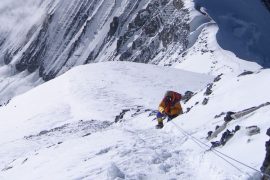 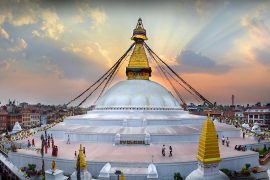 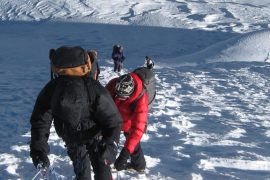 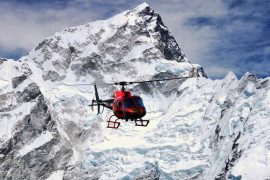